Due to the crowds I was much more selective this year in choosing who to shoot concentrating on people that I like or people that I found attractive, which are sometimes mutually exclusive. I also didn’t bother with anyone where I couldn’t get through the hordes of crowds like the girls at the Wicked booth. The most popular people this year seemed to be the celebrities, Bree Olson and Ron Jeremy, and Jynx Maze was the most popular besides those two. 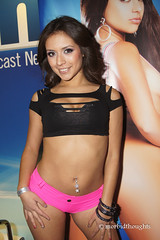 I decided to shoot my first AVN Awards since 2009. I was asked to do it as a favour for another photographer and I would only agree if I didn’t have to do the red carpet. So I was given ability to roam around and pull random people that I liked to set up one or two shots instead of doing the usual pornorazzi machine gun fire. Pictures seemed to come out better that way. I was happy to see Bobbi Starr, one of my favourite people, win Female Performer of the Year and was pleased to see Brooklyn Lee win Best New Starlet since she was so nice and sweet to her fans upon meeting them for the first time at the convention. 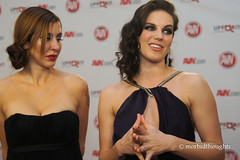 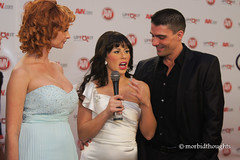 So of course the reason I go to these events year after year is to be able to see my friends again. Whether it’s my crew at IAFD, Mark Spiegler and the Spieglergirls, or the guys of adultdvdtalk.com, I always have a great time with them especially with the social lubricant known as alcohol.

Some highlights (or lowlights depending on your perspective):

I guess you want to see the pictures then: