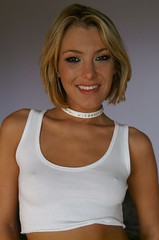 IAFD had received word from one of her friends that Joey Valentine had died back in December. However, it took me a while to confirm this since I didn’t have an obituary to work with. In this day and age, it seems like people are relying more and more on social networking sites to do memorials instead of a printed obit. The friend submitted corroborating evidence but asked us not to disclose it to the public. We do not know how she had died but people are always going to speculate when someone dies so young.

I had met Joey on two different sets. One for Tim Von Swine’s Pork BBQ and the other was from Erik Everhard’s Outnumbered 5. She was generally quiet and aloof, but was friendly whenever I directly interacted with her.

Her IAFD profile states she was active 2005-2010. Even though I am positive that she retired several years back, one of the idiosyncracies of our IAFD system is that the years active field relies on when her movies are released. We often don’t know when exact scenes are produced since producers sometimes bunch together movie scenes shot years apart. The back of the boxcover may give the dates, but it’s a crapshoot to match them up to the specific scenes. In this case though, I knew she had shot her scene in Outnumbered 5 in 2006, but it wasn’t released until 2010.